Lucky for you, you’re the proud owner of a laptop made by Fujitsu. They are well-built and perform well. But you’re missing out if you don’t know how to screenshot on Fujitsu laptop.

There are a few ways to take screenshots: using your keyboard, the Windows Snipping Tool and the Xbox game bar. I will also show you how to annotate and edit your screenshots. So, they look professional.

Without Further Ado, Let’s Dive In!

How to Screenshot on Fujitsu Laptop

There are many other ways to capture your screen and they will all differ depending on the operating system. So, if your Fujitsu laptop has Windows 11 (the latest version of windows).

The short keys for screenshotting are different compared to laptops running Windows 10. However, this would be the same if you were taking screenshots on an ASUS laptop, Lenovo, or Dell.

How Do I Take a Screenshot on My Fujitsu Laptop?

To take a screenshot on your Fujitsu laptop with Windows 10, press the Windows and PRTScn keys. Your screenshot will be saved to the Pictures folder. You can also use the CTRL key + PRTsc key together, and his action saves the screenshot to the clipboard.

How Do I Take A Screenshot On My Fujitsu Laptop Windows 11?

How to Take a Screenshot of the Active Window?

If your Fujitsu laptop is connected to an external monitor and you want to take a full-screen screenshot of only one display. With Windows 11 laptops, use the FN key combination (function keys).

First, select the display and then press FN + ALT + PRTScn. And for Windows 10 Fujitsu laptops. Press the ALT + PRTsc buttons together to take a screenshot of your entire screen. (Active screen only).

Next, I will show you how to screenshot using the Snipping tool. All Windows-based laptops, including Fujitsu laptops have this built-in tool. The snipping tool allows you to easily take screenshots of the entire screen or just a portion of the screen.

After taking your screenshot with the Snipping tool you can save it in any location on your laptop. The snipping tool has many great features, such as cropping, annotating, and selecting different areas. You can also share your screenshots online with your friends at work or school.

How to Screenshot Using the Snipping Tool?

Next, take a screenshot. So, to take a screenshot on my Fujitsu laptop using the snipping tool. I first click on the new button inside the toolbar. Then I choose which area on the screen needs capturing. And then decide on the mode. The Window snip mode is what I use to take a full-Screen screenshot.

After you have taken the screenshot, you can choose to either crop the captured image. Annotate (drawing arrows, circles, squares or text on the image). Then select either Save As to save your screenshot to a folder of your choosing. Or the Send To option to share the screenshot online.

Tip#3: How to Screenshot on Fujitsu Laptop: Xbox Game Bar

You can also use the Xbox game bar to take great-looking screenshots on a Fujitsu laptop. However, depending on the operating system you have. As to whether it has the built-in Xbox Game Bar.

The Xbox game bar has several screenshot features to easily capture your screen in many different ways. With the Xbox tool, you can also screen record your gameplay like I do on my Razer laptop. Which is perfect for creating YouTube videos or sharing them with your gamer friends or work colleagues.

To take a screenshot, first launch the game or program you want to capture an image from. Then press Win+G together and select the Camera Icon. This will take a screenshot of the whole screen. This time, the screenshot will be saved to the captures folder.

The Captures Folder is located inside the Video Folder.

In conclusion, you should now know how to screenshot on a Fujitsu laptop or Fujitsu Lifebook. Whether the laptop is running Windows 10 or Windows 11 operating system. The process is the same.

Thanks for Reading, Cya Next Time.

Hopefully you enjoyed reading this guide. If so, I have written loads of helpful gaming laptop tips here. Be sure to check them out next. 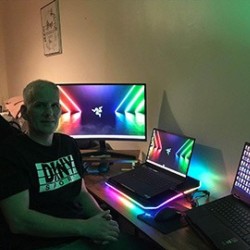 Avid tech lover since the days of the Sega Master System. Owned my first gaming laptop back in 2006. Since then, dissecting laptops became what I did best. Including models from MSI, HP, Dell, and now Razer. Plus, seven years in IT management and Digital Marketing.

link to How to Take a Screenshot on an ASUS Laptop (3 Best Ways!)

ASUS has always produced great laptops; they are a popular choice for many Windows users. But still, after all these years, one question still often crops up, how to take a screenshot on an ASUS...

Continue Reading
link to What Is the Lowest Temperature a Laptop Can Handle? Will it Break!

Understand what the lowest temperature is a laptop can handle before it starts to break down. Also learn what can happen if the laptop computer gets too cold.

Jimmtech.com is a website about gaming laptops. Created by James, who has a passion for gaming. With 15 years' experience tinkering in the portable gaming world. Offering how-to guides! Plus, tips for choosing the right gaming laptop! You take gaming seriously, and so do I.